Regional Forest Agreements (RFAs) are agreements between the State and Commonwealth governments. There are five in Victoria for different regions. They were meant to resolve the conflict surrounding native forest logging, but have failed to do so

This brief provides background on what Regional Forestry Agreements (RFA) are and how they have failed to deliver protections for Victoria's forests and habitats or certainty for industry - particularly following the devastating bushfires of 2019/20. We have provided some key recommendations to address this issue.

What is an RFA?

RFA’s are agreements between the State and Commonwealth governments. There are five in Victoria for different regions. The original RFAs were 20 year agreements established between 1997-2000.

RFAs sought to resolve the long-standing conflict surrounding native forest logging, but comprehensively failed to do so, despite:

As the original RFAs expired, the Victorian government decided to undertake a two year review process (three years for the East Gippsland RFA).

During the life of the RFAs, tens of thousands of hectares of critical habitat for forest dependent threatened species, including the Leadbeater’s possum and the Greater Glider, have been logged.

Following two decades of logging, these species are now formally recognised as closer to extinction with the Leadbeater’s Possum up-listed to critically endangered in 2015, and the Greater Glider added for the first time in 2016-17 to state and national threatened species lists as vulnerable to extinction.

RFAs removed federal oversight over logging impacts on ‘matters of national environmental significance’ under the Environmental Protection and Biodiversity Conservation Act (1999), such as nationally-listed threatened species in Victoria’s forests. This left only the state regulatory regime, which is outdated, lacks adequate mandatory rules to protect wildlife in logging areas, is failing to protect threatened species from further decline, and is often not enforced.

A fundamental basis of the RFA system was intended to be the establishment of a network of reserves to adequately protect Victoria’s forest biodiversity, known as the Comprehensive, Adequate and Representative (CAR) reserve system.

The formal and informal reserves have not been reviewed in light of new information about threatened species and the impacts of severe wildfire since the RFAs were entered. Both urgently require expansion in light of recent work mapping important habitats and conservation values in State forest, such as the VEAC Conservation Values report1.

In March 2018, the Victorian government announced a two year review of the RFAs, involving consultation with scientific bodies, industry and the community2 and working in partnership with traditional owners.3

Public consultation on behalf of the Victorian government showed overwhelming support for protecting forests from logging, a desire for improved recreation opportunities and a future for the wood and paper industry in plantations4.

Scientific advice during the review process recognised that under RFAs5:

The ‘modernised’ RFAs were made public on 1 April 2020, and introduce new levers for reform including the following:

The 2019-20 bushfires not only had a devastating impact on lives, property and communities – but also affected large areas of Victoria’s forests and has implications for forest conservation, wildlife and the future of the timber and paper industries.

The fires impacted 776 rare and threatened plants and animals in Victoria, including wildlife such as the Greater Glider. Of these 776 species, 185 suffered fire across more than half their habitat6. Remaining populations of forest-dependent species across the state are now more important than ever.

Even before the bushfires, the government needed to address over committed logging volumes. Now, with elements of the industry controversially pushing for immediate access to burnt areas and green unburnt areas – both highly damaging forms of logging that will harm recovering and living forests - the urgency to address logging over commitment is even greater.

As a consequence of the 2019-20 bushfires, Wilderness Society had called for the RFA review to be paused until there was a proper understanding of the bushfire impacts. Instead of a proper reassessment of these impacts, a clause called a “Major Event Review (MER)” has been included in the new RFA to allow for adjustments in the future

The 2019-20 bushfires meet multiple criteria as a Major Event, according to an assessment by Wilderness Society. Although a rapid assessment, it is clear these bushfires should trigger an urgent Major Event Review (MER) for four RFA regions: East Gippsland, Gippsland, North East and Central Highlands. 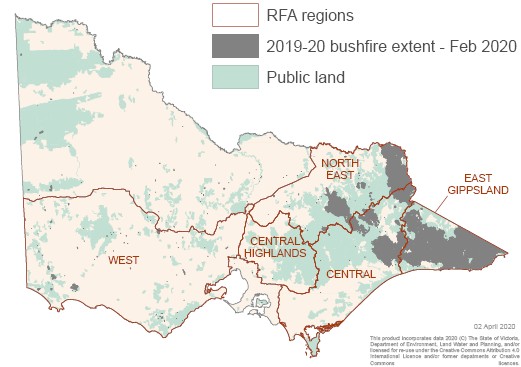 The Victorian RFAs define a Major Event as a substantial change in circumstances that has the potential to significantly impact upon:

(a) the objectives and operation of the RFA;

(b) the comprehensiveness, adequacy or representativeness of the CAR Reserve System;

(d) one or more Matters of National Environmental Significance (MNES)MNES; or

(e) the stability of Forest Industries, within the RFA Region, and includes (but is not limited to) natural events such as bushfires, floods and disease;

The rapid assessment indicated four RFA regions with severe consequences resulting from the 2019-20 fires should have Major Event Reveiws:

In context of the recent fires, there is an urgent need to bring forward the Victorian government’s planned 2030 industry transition out of native forests, and to rapidly implement Immediate Protection Areas and old growth protection measures on the ground.

The government announced these measures in November 2019,7 prior to the bushfire crisis unfolding. The circumstances in our forests are now dramatically different to those that informed the policy announcements. Continued supply of native forest wood to industry until 2030 is now untenable given the loss of timber and habitat (a large proportion of the Immediate Protection Areas, and old growth forest8 have now been burnt).

The logging industry phase out9 should be an integral part of bushfire recovery and response, to assist adjustment to the new social, economic and ecological realities relating to forests following the fires.

Victoria’s Regional Forestry Agreements need to facilitate rather than impede reform, and if implemented truly “modernised” RFAs would: