Koalas in South East Queensland are in big trouble. Populations have crashed by up to 80% in some regions. In late 2018, the Queensland Government appointed a Koala Advisory Council to ensure the survival of koalas in the region.

In late 2018, the Queensland Government appointed a Koala Advisory Council. This group has been responsible for helping to develop a Koala Conservation Strategy and hold the Government to account over the Strategy’s implementation. The Wilderness Society has been an active and outspoken member of the Advisory Council and pushed hard for stronger protections throughout the Strategy’s development.

In December 2019, the Queensland Government released a draft SEQ Koala Conservation Strategy for public comment and draft koala habitat mapping. This strategy provided a five-year framework to stop the long term decline of this iconic species.

Throughout 2019, our supporters have been saying loud and clear that they want the very best protections to save our beautiful koalas and we need them urgently before it is too late. They’ve:

The message from the ground was undeniable—we want to give koalas the very best chance of surviving and thriving in SEQ for generations to come.

And the Queensland Government has listened—to a point. They have now released new legislation to back up the Strategy. Before, there were very few controls on developers bulldozing koala habitat in SEQ. Now, thanks to all the people demanding stronger protections, those rules have changed.

Thankfully, it is now a lot harder to bulldoze koala habitat.

These are big steps forward for protecting koalas in SEQ.

Unfortunately, some loopholes remain that would allow some koala habitat to continue to be bulldozed. Also, only landholders can apply to have the koala habitat mapping changed—there is no process for people to nominate new habitat to be added to the mapping.

Finally, the regulations and strategy rely on the current biodiversity offsets framework which is not delivering effective outcomes for nature - this needs an immediate overhaul. All of these points are disappointing and not acceptable, so we’ll keep pushing for these to be improved.

But, this is not just about SEQ. There are also loopholes in the statewide deforestation laws that allow koala habitat to be bulldozed at an alarming rate. 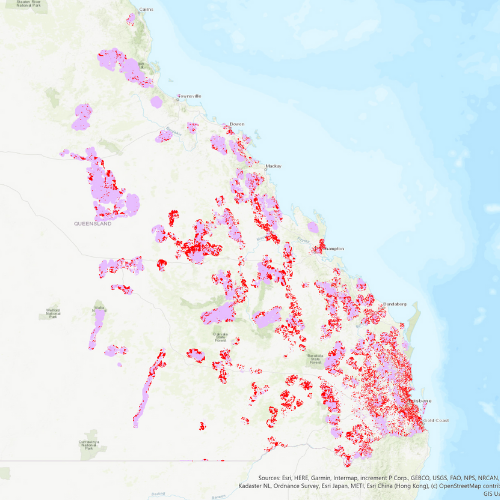 Koala habitat across Queensland (purple) shown with areas that have been cleared in red from 2013-2018.

This is simply unacceptable. Our vision is for a Queensland that protects all our koala habitat, wherever it is, from deforestation.

Australia’s federal laws are also failing koalas. This is especially true for koalas outside of SEQ which aren’t protected by the new regulations. The Environment Protection and Biodiversity Act is currently up for review.

Overhauling these laws and bringing in an independent body to assess development applications could have a huge impact on koalas and all of nature.